Thanks to all who joined us at Wentz Concert Hall, 3:00 PM on Sunday, December 2, 2018 for music by the Naperville Municipal Band, Art Beat Live performance art, presentations by Century Walk artists, a beverage bar, artisan hors d'oeuvres, a virtual Century Walk of our 50 locations of public art and more. See details below! 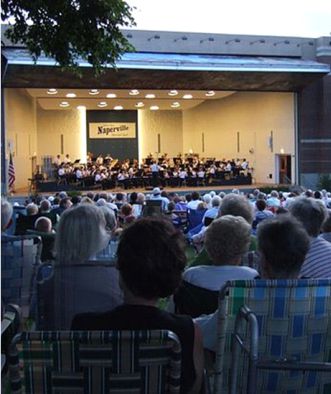 The Naperville Municipal Band has been entertaining the people of Naperville and the surrounding suburbs, in Central Park for over 150 years. The band has grown from a group of dedicated musicians whose vision brought them together in 1859 to its current 100 member roster. The band has played through storms (both literal and political,) marched under the blazing sun in countless parades, and provided thousands of hours of entertainment to a grateful public. It has undergone five name changes and raised money for four different band shells, twelve sets of uniforms, benches, music, and guest performers. Its ups and downs are interwoven with the history of the city and the country.

A typical Thursday night in the summer finds Central Park in Naperville packed with fans of all ages: babies, children, teens, middle-agers and octogenarians. They sit on benches, blankets, and folding chairs. Some have come early to enjoy a picnic supper; others munch on scrumptious homemade goodies prepared by whatever charitable organization has won the coveted lottery spot for the week. Children bounce up and down in time to the music, dogs snooze next to their owners, couples hold hands, and white heads lean together, remembering other concerts, other nights. The audience smiles, taps, claps and sings along. Everyone enjoys the good old fashioned fun! 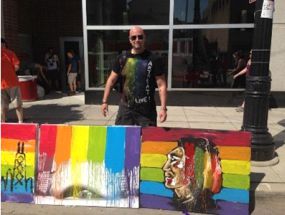 With over 30 years of experience in creative painting, Elliott decided it was time to expand his passion for painting. In 2007, he recalled his experience in watching Denny Dent (original artist known for bringing performance painting to the big stage) perform at a Chicago corporate event and decided he was going to develop his own live art experience. The following summer, Elliott performed his first ever Artbeat Live painting at a local festival. He amazed audiences with his artistic paintings of John Lennon and Jimi Hendrix. After his performance, Elliott realized he loved performing in front of people and wanted to continue to create. After several years and hundreds of live art performances later, Elliott knew he finally created his own unique style of art performance.

As excitement and word of mouth spread, Artbeat Live gained the attention of national sports teams, corporate brands, charities and foundations all over the world. Elliott got his first taste of world wide attention while performing for corporate sponsors at the 2010 Winter Olympics. Following, he performed at the first playoff game (2010) of the NHL Chicago Blackhawks, in which two of his paintings raised several thousand dollars for Chicago Blackhawks Charities. During the 2010 Chicago Blackhawks Stanley Cup win, Elliott appeared on ABC, NBC, CBS, FOX and WGN news networks.

"Artbeat Live is not just entertainment but a means to highlight my passion for philanthropy in addition to giving back to the community through my passion of painting."

Elliott has taken performance art and made it his own. Each performance is unique with a musical and visual style, all while igniting energy and passion through each subject painted on his canvas. Performance Artist Elliott From creates every canvas with explosive brush strokes, vivid colors and an expressionistic style, known today as an original Artbeat Live painting.

Every time Elliott steps on stage, he conveys one compelling message to his audiences: "Everything is possible when you paint out of the box, especially with your hands!"

Thank you to our Sponsors!