Show your support for Century Walk...

Many nonprofits are doing amazing work in our communities. They are often centered on helping people today with basic needs. What sets Century Walk apart from them is that the art we build for our community today is meant to last well into the future.

With your support, this wondrous portfolio of art installations will inspire future generations and continue to build community as we tell and retell our colorful history. Our art installations are beautiful sculptures, murals, and mosaics illustrating the people and events that helped shape Naperville. With your legacy gift, those pieces will pass on to future generations those stories.

Please consider including Century Walk in your estate planning. As a part of Century Walk's Legacy Club, you will be recognized on our website and at our events, but your greatest benefit is knowing that you have played an important role in a lasting legacy of public art.

Century Walk, founded in 1996, is a nonprofit organization. Our mission is to bring art and culture to our community and all who visit us. We rely on grants and private donations. Please consider making a donation today. 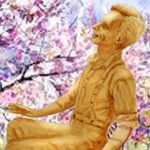 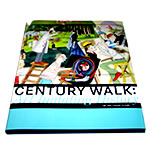 Colorful, coffee-table book brings 35 pieces of art together in one place and guides readers through an appreciation of the artworks and the talented artists who created them. Written by Naperville author Jini Leeds Clare. Book is available in three colors: Gold, Red, and Blue.

It took the author more than two years, 112 pages, and 300 photographs to adequately tell the story of Naperville's Century Walk, a public art project that began in 1995. "It was a labor of love," she admits. "I served on the Century Walk Board for 12 years and thoroughly enjoyed watching the creative process of each piece. But when I spoke with the artists and learned how art impacted their lives, I realized that their stories needed to be an essential part of this book." It took Clare months to locate the artists or their family members and interview them.

In fulfilling its original mission to honor significant people, places and events of twentieth century Naperville, Century Walk has led in the creation of a remarkable gallery of art produced by accomplished sculptors, mosaic artists, and muralists. According to Clare, "Many people will be surprised to learn that Century Walk features artists who are known nationally and internationally or who are leaders in their fields. One of our artists, Emanuel Martinez, has three pieces of art in the Smithsonian American Art Museum in Washington, D.C. Another, Dennis Smith, had one of his sculptures, Signing the Constitution, placed in American Embassies in London, Moscow, and Prague. Dick Locher, who created the Dick Tracy sculpture, is well-known internationally and even earned a Pulitzer Prize."

Century Walk: Art Imitating History was commissioned by the Century Walk Corporation and was financed by a City of Naperville Special Events and Cultural Amenities (SECA) grant and by developers Dwight and Ruth Yackley, owners of BBM Incorporated. The book was beautifully designed by Lisa Johnson and Jack Jacobi of Gerard Design in Warrenville and was printed in Ohio by RR Donnelley. Photographs in the book were taken by Don Manderscheid, Robert McKendrick, and others. 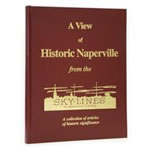 A View of Historic Naperville from the Sky-lines
By: Genevieve Towsley

A Collection of Article of Historic Significance. First printed by The Naperville Sun in 1975. Reprinted in 1990.

As a writer for The Naperville Sun, Towsley spent many years learning about this community, interviewing "old timers" about their experiences and writing a series of articles for the newspaper about the town's history. Over the years, Towsley's book â€” a collection of those newspaper articles â€” has remained an important resource for anyone hoping to understand this city's fascinating heritage. Hardcover, 258 pages. Over 100 stories with old photos. This 5th Edition book, printed in 1990. Genevieve's book is currently available at Anderson's Bookstore and the Naperville Settlement Gift Shop as well for $29.95.